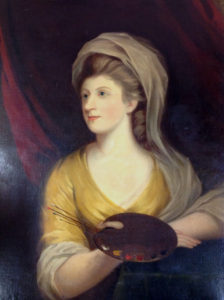 Diana Midleton (1762-1823) was the only child of Admiral Sir Charles Middleton, first Baron Barham (1726-1813) and Margaret Gambier (dI792). In 1790 she married Gerard Noel Edwardes (later Noel Noel) and succeeded to the barony on the death of her father.

Her first visit to Gower was more or less by accident. In 1813, Lady Barham was on her way to Poundisford Park, Somerset to spend some time with her daughter, the Hon Mrs Wilman. On her arrival at Bristol a letter awaited her, saying that Mrs W could not receive her for a fortnight. Her ladyship, not knowing how to employ her time, asked for a map and her attention was drawn to Swansea, wither she determined to go, accompanied by the Rev Mr Lake and Mr Hammerton.

Whilst there she became acquainted with the late Rev Wm. Kemp, with whom she went into Gower, and being much concerned to see the darkness of the place, and spiritual destitution of the people, was anxious to know what she could do, to improve their condition. With these feelings her Ladyship left Swansea for Poundisford Park and from thence to Brighton, where she continued to make it a subject of earnest prayer. Feeling convinced that she could do more for the people of Gower by going down to reside amongst them than by any other means, she accordingly did so after a lapse of nine months, where she was accompanied, as before with Mr Hammerton.

Lady Barham was ahead of her times in that she ‘had no inclination towards any particular denomination during her early years in Gower, her main concern was to further the gospel here in the most effective manner irrespective of denominational results’. In the trust deed she set up by her will the trustees had to profess belief in the Thirty-nine Articles of the Church of England and in the Westminster Confession. In 1815, on the advice of the Rev Mr Kemp, she asked the Welsh Calvinistic Methodist Association for a minister. They sent John Rees from Anglesey and he was joined, in 1817, by William Griffiths ‘the Apostle of Gower.

In 1821, Lady Barham severed her connection with the Calvinistic Methodists as a result of their refusal to ordain William Hammerton. This provoked what can only be called an unholy row although there seems to have been a gradual build up of friction between the personalities involved. William Griffiths, who was one of the persons who suffered as a result, wrote about Lady Barham’s ‘coolness’ and ‘caprice’. However, long afterwards, he wrote, ‘She was taken away to her reward, released from all the conflict of this life, and from the unpleasant religious contention ….. which was going on in her chapels at that time. I always believed that she was made more the instrument of a party than the principal mover in that change. But she being the sole pecuniary supporter of the work, the blame was laid at her door as the whole was carried on in her name and she unfortunately gave her sanction to it. Soon after her decease, things began to appear in their true light.

Lady Barham’s funeral notice in The Cambrian for Friday the 18th of April 1823 reads as follows: ‘On Saturday last, aged sixty, at Fairy Hill near Swansea, the Right Honourable Diana, Baroness Barham, of Barham Court, in the County of Kent, sole daughter and heiress of the late Lord Barham, and the lady of Sir Gerard Noel Noel, Bart, MP. In her the distressed poor will have to lament the loss of a valuable benefactress, the friends of religion a strenuous and undeviating supporter of the cause of Christ, and the recollection of her many and exemplary virtues will be long and affectionately cherished by those who possessed the happiness of her acquaintance.

Lady Barham was of particular importance to the development of nonconformity in rural Gower. Without her work, there would probably have been a vacuum in the religious and educational growth between ‘English Gower’ as opposed to ‘Welsh Gower’. She is also important in providing one of the few links between English and Welsh nonconformity after the religious awakening of the eighteenth century. She has received neither the attention nor the justice to which she is properly entitled.

When Lady Barham gave Mount Pisgah to the people of the parishes of Penmaen and Ilston she was as concerned for their educational welfare as for their spiritual well-being. She ensured that the tradition of the Circulating Schools was carried on and that both children and adults were taught to read and write and sent parcels of books to the minister to enable this to be carried out. The Religious Census of 1851 (not an entirely accurate document) states that there were 60 scholars present on the afternoon the census was taken.

The Barham Centre is dedicated to Lady Barham’s memory and continues her work in providing religious, educational and cultural activities for the same communities she blessed 180 years ago.

Give thanks for her life,
Honour her memory,
Pray for her soul